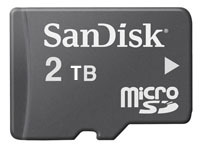 SanDisk already has a 8GB and 16GB microSD card, and there are rumors that a 32GB microSD card is already in the works. But now the rumor mill is coming out with “news” that a 2TB card is under construction! According to the SD association, there is a new eXtended capacity memory card (SDXC) that will be released early 2009. The SDXC memory cards will have capacities starting from 32GB all the way up to 2TB and have read/write speeds of up to 104MB per second! Just to put things into perspective, 2TBs can store 480 hours of HD video recording, 100 HD movies, 130,600 fine-grade photos, and more mp3 files that you will ever need in your life. SanDisk hasn’t actually made an official statement, and this could all just be a rumor. But if a 2TB microSD card is indeed on the works, don’t expect them to hit the stores anytime soon and don’t expect them to be cheap, either!

One thought on “SanDisk Coming Out with 2TB MicroSD Cards?”