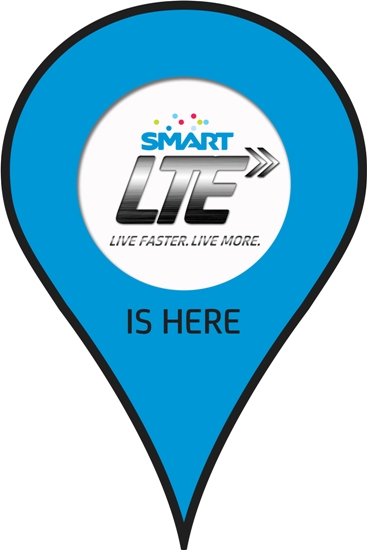 They are expanding further its fourth-generation (4G) Long Term Evolution (LTE) network which already has over 1,000 sites covering 180 cities and municipalities, including Metro Manila, as well as areas in North Luzon, South Luzon, the Visayas, and Mindanao.

Smart introduced LTE in the Philippines in August 2012 and has since been rolling out the service in more areas of the country.

Smart is the only operator to provide 4G LTE coverage for mobile users in Caloocan, Mandaluyong, Marikina, Navotas, Paranaque, Pasay, Pateros and Valenzuela.

Moreover, Smart is the sole 4G LTE provider in Capiz, Iloilo, Leyte and Negros Oriental in the Visayas, and Misamis Oriental and Zamboanga Del Sur in Mindanao.

“If we count as well our HSPA+ and Wi-Max services, Smart offers the most extensive wireless broadband coverage for both fixed and mobile applications. All of these services are powered by superior fiber optic transmission network of PLDT and Smart, which is the most powerful and pervasive in the country,” he added.

Moreover, Smart is upping the ante by being the first to conduct tests of LTE Advanced, the next stage of development of LTE. In the past three months, the mobile operator has already tested LTE Advanced in Manila, Davao City and Boracay, Aklan.

“LTE Advanced is capable of delivering data speeds of from 200 to 700 mega bytes per second (Mbps). This will open up new possibilities for mobile internet service, especially in multi-media and video applications,” Pena said.

Smart’s expanded 4G LTE coverage is supported by the domestic fiber optic cable network of PLDT and Smart which is now over 71,000 kilometers long, as well as PLDT’s extensive international cable networks.